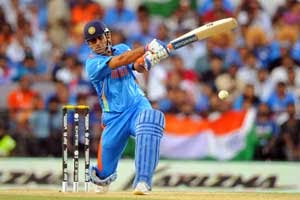 Modern day cricketers are all rounders in a way, skilled at playing multiple roles as they jump across different formats of the game. Also, as top stars are contemporary royalty, national icons, 24-karat celebrities, it is no surprise their field of play extends beyond cricket and their services are utilised in diverse areas.

Cricketers are routinely sucked into activities away from the game, mostly in the commercial ecosystem that surrounds professional sport. Cricketers, like successful film stars, have enormous commercial appeal; Sachin and Dhoni are in demand for endorsing products, selling soap and scooters, mobiles and motorcars, colas and cars.

In corporate India, it is standard practise to use cricket celebrities as brand ambassadors and to offer them handsome amounts to push products and promote the company. This alliance, top star getting top money in a pure commercial arrangement, is normal. It happens all time.

It is also fairly common for celebrities, cricketing or others, to endorse social causes by becoming the face of campaigns to raise awareness about education, health, environment.

But some times, this business of brand ambassadors takes a serious leap to go beyond a marketing gimmick or a strategy to spread a socially relevant message.

The other day, recently retired celebrity Sachin Tendulkar lent a helping hand to support Unicef's health campaign, urging everyone to wash their hands. At a glittering, well attended function in front of several TV cameras he said the politically correct words, and also made a charming confession that, as a child, this is something he did not do but he now knows better. Sachin's message was widely reported: it caught the news on every channel that evening and made headlines in newspapers the next morning.

Much the same happened little earlier when Virat Kohli, a rising star and youth icon, was appointed brand ambassador of a para military force. At the function, Virat was presented a cap and blazer bearing the logo of the force, after which he, presumably, made a rousing speech about making a contribution to society and giving back .

Virat, given his appeal with the youth, also fronted the Election Commission campaign in Delhi urging youngsters to vote.

The reasons for leveraging the stardom of Sachin or India's youthful future captain are easy to understand. In either case, as brand ambassadors, neither is required to sell a product which has a price tag. Both are mere instruments of communication, used to pass on a message, create awareness and, hopefully, influence people.

But does such celebrity endorsement, and the business of public service brand ambassador, really work?

Obviously, many feel celebrities matter, they can improve image, help reach out to the public and create an impact. Whether people will start washing hands because Sachin has asked them, or whether more people voted because Virat made an appeal is debatable. Cynics say all media attention is fleeting and the newspaper headlines and the short news clip on television is quickly forgotten. This business of 'inspiring and motivating' is great board room talk but what it translates into, in real terms, is not so certain.

Whatever the final outcome, whether more hands are washed and if there is renewed interest in the paramilitary force, at least the choice of the brand ambassadors in these cases can't be faulted. Nobody can rival the pan India popularity or presence of Bharat Ratna Tendulkar. Similarly, Virat is an outstanding example of a young India that is ambitious, assertive, talented and successful.
Posted by Ankita Kapoor at Monday, December 30, 2013