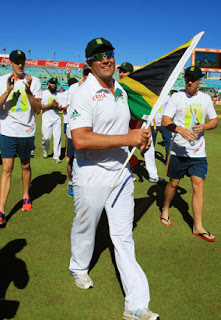 Unlike Wanderers in Johannesburg on December 22 where they choked eight runs away from a pulsating win, South Africa were not to be denied in Durban. The world's No. 1 Test team ran out comprehensive winners, thrashing India by 10 wickets at Kingsmead on Monday. In a match where 54 overs were lost to the elements, South Africa's bowlers scripted a well-deserved win after the talismanic Jacques Kallis scored a century in his farewell Test match to give the home team a decisive first innings lead.

India's batting line-up failed to live up to its reputation for the second time in Durban as the visitors were all out for 223 in their second innings leaving South Africa with only 58 runs to get. Skipper Graeme Smith (27) and Alviro Petersen (31) got the required runs without much fuss as South Africa won the two-match series 1-0. Having lost their last four Tests at Kingsmead, this was South Africa's first Test win in Durban since 2008. (Right time to retire: Kallis)

The only bright spot from an Indian point of view was Ajinkya Rahane's fighting 96. The 25-year-old right-hander from Mumbai deserved his maiden Test hundred but was finally left stranded as India lost wickets at regular intervals on Monday morning. A combination of poor application and a couple of dubious decisions left India (173/7) looking down the barrel by lunch but the visitors' top-order batsmen clearly floundered in front of some quality bowling.

Dale Steyn took three for 47 in the second innings and two of them included the team's batting pillars, Virat Kohli and Cheteshwar Pujara. If India had to survive three sessions on Monday, much depended on Kohli and Pujara but it was not to be. Kohli got a poor caught-behind decision but Pujara was bowled by a Steyn beauty that left the normally judicious Saurashtra batsman completely foxed. The 30-year-old Steyn also reached 350 Test wickets and his nine wickets in the match - he got 6 for 100 in the first innings - proved why he was the world's leading pacer, showing enormous mental stamina and conviction to bounce back after getting just one wicket in the first Test at Johannesburg where conditions were more favourable to seamers. (Dhoni unhappy with decisions)

Monday's star-turn was not Steyn's handiwork alone. It was Robin Peterson's left-arm spin that did much damage as his 4 for 74 forked the life out of the Indian middle order. Peterson's victims included skipper Mahendra Singh Dhoni and Ravindra Jadeja, the latter throwing his wicket away after hitting a six. It was poor cricket by Jadeja. Dhoni has not scored a 50 his last 10 Test innings and Monday was a day to make amends. The skipper too played a loose stroke and threw in the towel easily. (Great learning curve: Dhoni)

The Durban game will be remembered for being Kallis' farewell Test. The 38-year-old veteran, arguably the world's best all-rounder, left on a high after scoring a brilliant 115 under pressure. His 45th century in 166 Tests left him with a healthy average of 55.37. Kallis' exit will leave a gaping hole in the South African top order as his patience to build an innings and adjust on all kinds of conditions will not be easy to fill. He was deservedly given a standing ovation by both teams but Kallis would probably been happier to have bowed out in front of his home fans at Newlands, Cape Town.  (Pics)

"It's strange walking out to bat knowing that there is no tomorrow and it will be your last opportunity to get a 100 for your country," Kallis said. He clearly did better than a Sachin Tendulkar or a Ricky Ponting, who did not score a century in the last Test innings. World cricket will miss him. (Kallis says 'Thank you')
Posted by Ankita Kapoor at Monday, December 30, 2013