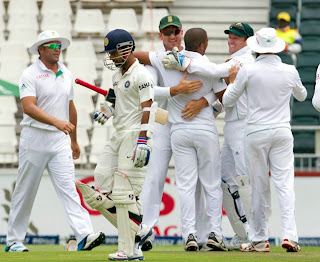 Welcome to the LIVE coverage of Day 2 in the 1st Test match between India and South Africa from the Kingsmead stadium in Durban. SCORECARD | Day 1 | 1st Test Analysis
13.2 overs: FOUR!! Alviro Petersen skips down the track and smashes it straight down the ground for a boundary.
SEVEN RUNS off the over!!

12.2 overs: FOUR!! Graeme Smith stands tall and cuts it towards third man for a boundary.

Jadeja starts off with a MAIDEN!!

First sign of spin, Ravindra Jadeja comes into the attack for India.
With Graeme Smith(21) and Alviro Petersen(19) at the crease, South Africa are currently at 40/0 after 10 overs.

MAIDEN OVER by Sharma!!

First change, Ishant Sharma comes into the attack for India. He's ONE SHORT OF 150 TEST WICKETS!!

4.4 overs: FOUR!! Alviro Petersen plays with soft hands and sends it towards third man for a boundary.

3.5 overs: FOUR!! Graeme Smith was looking to leave it but the ball takes an edge off the bat and races past slip cordon for a boundary.

3.1 overs: FOUR!! Graeme Smith gets on the frontfoot and whacks it past mid-off for a boundary.
NINE RUNS off the over!!
It's RAINING BOUNDARIES for South Africa at the moment!!

1.2 overs: FOUR!! Alviro Petersen hangs back and flicks it through square leg for another boundary. BACK-TO-BACK boundaries for Petersen!!

1.1 overs: FOUR!! Alviro Petersen waits for it and flicks it off the pads for a boundary. POOR LINE from Shami!!

Mohammed Shami will bowl from the other end for India.

TEN RUNS off the over!!

0.6 overs: FOUR!! Graeme Smith gets on the backfoot and thumps it through midwicket for another boundary in the over.
0.3 overs: FOUR!! Graeme Smith gets a big stride forward and drills it through extra cover for the first boundary in the innings. CRACKING SHOT from Smith!!
Graeme Smith and Alviro Petersen are out in the middle for South Africa while Zaheer Khan will start the proceedings for India.
Team India have been bowled out for 334 runs by South Africa on Day 2 at the Kingsmead stadium. Fortunes have swung this way and that so far. Steyn's initial burst gave South Africa the momentum early in the day but India staged a recovery through a good stand between Kohli and Rahane. It was later extended by Dhoni and Rahane for a while. The latter got his maiden Test fifty but Steyn came back once again to hasten the end. South Africa were looking a bit flat at that moment but Steyn showed just why he's such a highly rated bowler. The tail was wrapped up in no time and India were restricted to a decent total. The pitch holds no demons and the sun is out as well. South Africa will enjoy batting in these conditions.

hat's the END OF INNINGS for Team India!!

111.3 overs: That's OUT!! Morne Morkel has got Mohammed Shami out caught at first slip. Shami slashes hard and gets an outside edge through to Graeme Smith at teh first slip. Mohammed Shami departs after scoring one run off six balls. FINAL NAIL IN THE COFFIN for India!!
With Mohammed Shami(1) and Ajinkya Rahane(51) at the crease, Team India are currently at 334/9 after 111 overs.
109.1 overs: Ajinkya Rahane punches it towards long-off for a single and brings up his MAIDEN TEST FIFTY.

This is the 2nd TIME that Dale Steyn has got 6 WICKETS in an innings against India at Durban!!

Mohammed Shami comes to the crease for India.

108.5 overs: OUT!! Dale Steyn has got Ishant Sharma out caught by the wicket-keeper. Ishant tries to fend it but gets an outside edge through to AB de Villiers behind the stumps. Ishant Sharma walks back in the hut for four runs off three balls with a boundary.

108.4 overs: FOUR!! Ishant Sharma leans forward and creams the drive through covers for a boundary. That was ABSOLUTELY GORGEOUS from Sharma!!

Dale Steyn gets a FIVE-WICKET HAUL!!
108.2 overs: That's OUT!! Dale Steyn has got Zaheer Khan out caught by the wicket-keeper. Zaheer slashes hard and gets an outside edge through to AB de Villiers behind the stumps. Zaheer Khan perishes without troubling the scorecard. Team India in TATTERS now!!

Zaheer Khan comes to the crease for India.

That's the 200th TEST CATCH for Jacques Kallis. He becomes only the 2nd FIELDER in Test history to hold 200 catches!!

106.4 overs: That's OUT!! Dale Steyn has got MS Dhoni out caught at first slip. Dhoni was chasing the wide delivery only to edge it straight towards Graeme Smith at the first slip. MS Dhoni departs after scoring 24 runs off 40 balls with three boundaries. Dhoni THROWS away his wicket!!
With MS Dhoni(21) and Ajinkya Rahane(46) at the crease, Team India are currently at 316/5 after 105 overs.

TWO RUNS off the over!!

JP Duminy comes into the attack for South Africa.

101.4 overs: FOUR!! Ajinkya Rahane goes for the drive and gets an outside edge past slip for a boundary.

101.1 overs: FOUR!! Ajinkya Rahane rocks back and steers it square on the off side for a boundary.

100.6 overs: FOUR!! MS Dhoni gets on top of it and flays the cut through gully for another boundary.

100.3 overs: FOUR!! MS Dhoni flays the cut and gets it past backward point for a boundary.

And, we're back. MS Dhoni and Ajinkya Rahane are out in the middle for India while Robin Peterson will start the proceedings for South Africa after Tea.
TEA: The session was definitely DOMINATED to South Africa. Steyn STUNNED the Indians with a TRIPLE STRIKE, getting Pujara and Vijay caught at the wicket before Rohit Sharma left a straight ball. Virat Kohli was in his ELEMENTS and looked good for another BIG KNOCK. He was well supported by Rahane as the pair STABILIZED the innings. Morkel returned to KNOCK OVER Kohli though and the hosts will be the HAPPIER TEAM going into Tea.