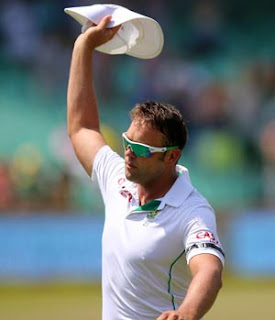 Durban:  In a fitting tribute to one of the greatest all-rounders of the game, Kingsmead gave Jacques Kallis a standing ovation as the veteran star led the South Africans out as the Boxing Day Test against India started on Thursday. Kallis will be retiring at the end of this Test match after making his debut in December 1995. Before this Kingsmead game, Kallis has scored 13174 runs in 165 Tests and is the third big player to quit Test cricket this season after Ricky Ponting and Sachin Tendulkar. (Pollock, Wessels hail Kallis)
(Ovation for Kallis, in pics)

Thirty-eight-year-old Kallis announced his retirement on Wednesday. He will continue to play ODIs and T20s for South Africa. On Thursday, Kallis led the South Africans out after India won the toss and decided to bat. At the toss, South African skipper Graeme Smith said: "Kallis was probably the greatest cricketer to have come out of our country. It's been an emotional few days. I have been chatting to Jacques since before the first Test. We want to put in a special performance for him in this match." (Hope to play 2015 World Cup: Kallis)

In 165 Tests for South Africa, Kallis scored 13174 runs at a stunning average of 55.12. He also has 292 wickets and 199 Test catches, proving what a quality cricketer he has been for his team in the last 18 years. With 44 hundreds to his name, Kallis was closest to Tendulkar's record of 51 Test centuries. (Kallis' maturity and calmness will be missed: Domingo)

"It wasn't an easy decision, with Australia around the corner and the success this team is enjoying, but I feel the time is right. I don't see it as goodbye, I still have a lot of hunger to push South Africa to that World Cup in 2015 if I am fit and performing," Kallis said in a statement.