Real test is to sustain success 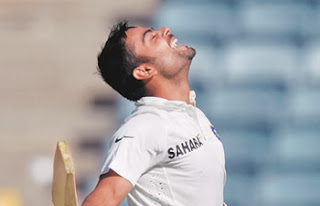 Reverse swing is a fascinating art in fast bowling, which the bowler needs to work on for hours at the nets before he can produce the magic in a match.

However, when it comes to critics who speak or write on cricket, they churn out some 'reverse swing' of their own, quickly forgetting how much they had rubbished the Indian side before the team left the shores.

Having dominated proceedings with bat and ball in Johannesburg, the Indians are on a high. To say that the scent of an Indian victory is in the air would not be premature, and captain M.S. Dhoni would be happy with the way things have panned out over the last four days.

To be sure, one comment from critics which stands out like a sore thumb is that "this is the real test" for the young Indian side. Come on, any cricket, whether at home or away, is real and winning counts.

If winning only on foreign soil is "the real test" then visiting teams from Australia and West Indies, which lost in India earlier in 2013, were complete failures. To not do well abroad consistently is definitely a sign of weakness, but winning or losing is part and parcel of the game. When India failed to get a grip on the ODI series in South Africa, excuses were already being trotted out as to how they had had little time to prepare.

There are many positives which can already be seen from the first Test and it has a lot to do with the disciplined bowling effort from the pacemen.

Watching Zaheer Khan bowl with zing and verve is indeed exciting as the old warhorse has worked hard on his fitness. There was never much doubt about his bowling skills, especially when he served a reminder of his class in the early part of the Ranji season.

Bowling in South Africa with the red Kookaburra ball is something which Zaheer has done extremely well, shouldering the responsibility of being the 'guru' for Ishant Sharma and Mohammed Shami with aplomb.

If one takes a look at the wicket, it is not one of those typical nasty Wanderers tracks we have seen in the past. There is something in it for the fast bowlers to have a go at the batsmen, and the support Zaheer has got from Ishant and Shami has been good. A lot of doubt had been expressed over the ability of the Indian batsmen to cope with the conditions and how, in the absence of Sachin Tendulkar, there would be pressure on India. I am sure all those who have watched the four days of action will agree the Indian batting has been delightful, with Virat Kohli and Cheteshwar Pujara catching the eye.

This has been Virat's year for many reasons. After the highs of his ODI batting displays in 2013, he carved out a beautiful century in the first innings and was unlucky to miss out in the second innings in Jo'burg.

Batting in the longer version of the game calls for adjustments in technique and approach. Virat showed that batting at No.4 is something he is enjoying, though comparisons with Sachin Tendulkar should be desisted from. Over the decades, in cricket, it has become fashionable to compare batting styles of masters from different eras. As Sachin Tendulkar played his 199th and 200th Tests in Kolkata and Mumbai, Don Bradman's famous observation - Sachin's batting reminded him of his own style - was reproduced many times over.

Bradman is gone and Sachin has retired, but analysts will never stop comparing. The other day, when 'White Lightning' Allan Donald remarked that seeing Virat bat reminded him of Sachin, it was pretty surprising. Donald has bowled many times to Sachin and knows what it was like to test the batsman with sheer pace and bounce.

Sachin is Sachin and Virat is Virat, so let's avoid these comparisons. Similarly, on Friday, when Pujara slammed a magnificent hundred, people were ready to compare him with Rahul Dravid.

I do not know whether this is like a hangover, where fans and critics are unable to get Sachin, Dravid, V.V.S. Laxman and Sourav Ganguly out of their heads. The reality now is that the current Indian side is in the process of rebuilding. To judge the side on the basis of one match or one series is wrong.

The bowlers have rediscovered the zing and swing and the batsmen are putting their heads down and playing well. Building a team for the future is now the mantra and in that direction, skipper Dhoni is playing a crucial role.

A lot of cricket for Team India in 2014 will be away from home. So to say that it will be the "real test" is not apt. But yes, while winning at home is taken as something for granted, winning abroad is special.