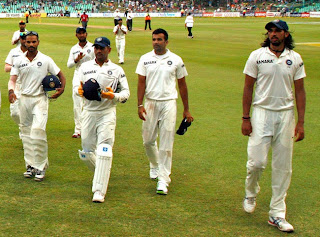 It was almost around this time of the year in 2012 when Team India was being humiliated by arch-rivals Pakistan in their own backyard during the three-match ODI series. It was a setback that probably led the foundation of a glorious year to come for India.

The year 2013 witnessed a fairly young and inexperienced Team India dominate the world of cricket in almost all formats of the sport.

Dhoni's men avenged their shambolic overseas Test loss against England and also tamed the Australians. The Windies were not spared either, the MSD brigade thumped Darren Sammy's men fair and square in both Test and ODI series. But, all of these triumphs came on the Indian soil - raising doubts on India's domination in the sport.

The only overseas victory, that was perhaps India's highest point of 2013, came in the ICC Champions Trophy. Team India stunned the hosts England in a rain-hit final to clinch the coveted title.

Indian team got a big opportunity to silence their critics when BCCI sanctioned the highly-awaited tour to South Africa. Team India was subjected to prove their mettle overseas in order to claim their domination in cricket.

With India's horrific form overseas, a win over the experienced side with the likes of South Africa was more like a distant dream for Dhoni's men. Still, counting on their ecstatic performance back home, Indian fans expected a tough fight.

But as they say - in order to be the best, you need to take out the best. Team India was clearly not the best and it reflected in their game against one of the toughest opponents they faced in 2013.

Nothing worked for India in the ODI series. Their star batsmen - who were busy scoring double centuries and chasing 350+ totals at ease - suddenly found themselves ducking for cover against the sheer pace of the South African bowlers.

The bowling was already a problem but given the conditions in South Africa, the Indian bowlers failed to make an impact yet again. The result was obvious and the high-flying Indian team came down crashing in no time.

After losing the ODI series 2-0, India was looking to salvage some pride in the Tests. But, that was highly unlikely considering South Africa's Test status.

Gutted with their dismal show, India placed their best foot forward and maneuvered the first Test match to a thrilling draw. Virat Kohli and Cheteshwar Pujara led one of the greatest counter-attacks in the overseas conditions for India.

It was a psychological victory that raised the stakes for the 2nd and deciding Test match. Everything turned out great for the Indian team but that was only restricted to the first day.

From 181/1 at the end of Day 1, Team India crumbled to a mere 334 runs on Day 2. Dale Steyn's fire balls turned out to be the Achilles' heel for the Indian batting maestros and since then, Dhoni's brigade were left chasing the game.

South Africa's ten-wicket win in Durban is a big wake-up call for the day-dreaming Team India and the BCCI - who apparently seem content with their performance at home.

But, with the 2015 ICC World Cup scheduled in Australia and New Zealand, Dhoni & co. will need to prove their mettle overseas more often than gunning the opposition on flat wickets in their own backyard.
Posted by Ankita Kapoor at Tuesday, December 31, 2013