Natal: Colombia qualified for the last 16 of the World Cup for the first time in 24 years after Japan and 10-man Greece played out a dire 0-0 draw in Natal on Thursday.

Japan failed to take advantage of the Greeks being reduced to 10 men from the 38th minute when captain Konstantinos Katsouranis was sent off for a second bookable offence.
Both sides picked up their first point and can still qualify from Group C, although they must win their final matches to do so.

Greece play Ivory Coast, who are on three points, in their final match while Japan tackle Colombia, who have a perfect six points.

Japan winger Shinji Kagawa`s terrible year continued as after a miserable season with Manchester United Japan coach Alberto Zaccheroni dropped him to the bench after a poor showing against Ivory Coast.

Japan controlled affairs in the first-half thanks to the surging runs of left-back Yuto Nagatomo and the tight, short passing of a potent midfield being marshalled superbly by Keisuke Honda.

Greece`s chances of taking something from the game lessened dramatically during a disastrous five minutes in the first-half.

First leading striker Kostas Mitroglou`s injury nightmare, which saw him barely play a game for Fulham after a multi-million pound move in January, continued as he hobbled off in the 35th minute.

Three minutes later he was followed by his Katsouranis, though for a less commendable reason as he was sent for an early shower after being booked for a second time in the game.

Greece, though, have shown that they are never more dangerous than when their backs are against the wall and soon after they produced their best chance of the half, Vasilios Torosidis stinging the palms of Eiji Kawashima with a fierce drive from the right of the area.

Zaccheroni eventually sent on Kagawa on 57 minutes as Greece appeared to be comfortably holding their opponents.

Greece, however, again came closest to breaking the deadlock as Kawashima did brilliantly to get down and turn away for a corner a header from Theofanis Gekas.

Japan found their rhythm again and carved out a fine opportunity when Kagawa sighted Atsuto Uchida ghosting in deep on the right, but after the defender`s delivery across goal Yoshito Okubo could only splice wide from a tight angle. 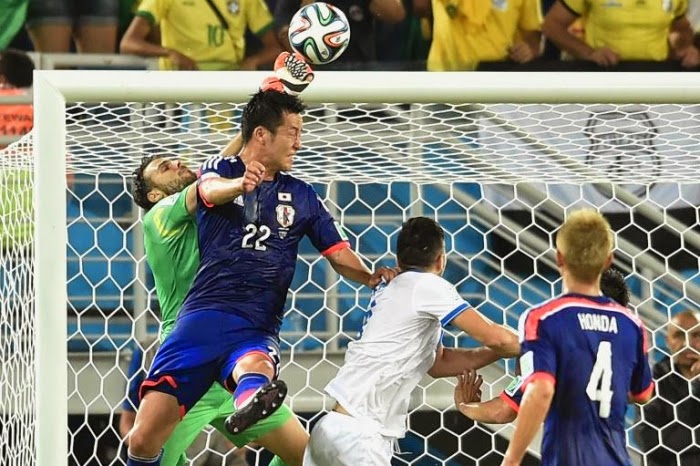 A Nagatomo delivery then caused confusion in the Greek box, but Uchida spurned another chance with a sliding effort that was just off target.

A speculative 30-metre drive from Okubo forced Orestis Karnezis to parry on 77 minutes and Japan`s final chance fell to Yasuhito Endo in the 90th minute when a free kick was awarded on the edge of the area, but the midfielder`s curling effort was parried to safety by Karnezis at his far post
Posted by Ankita Kapoor at Friday, June 20, 2014