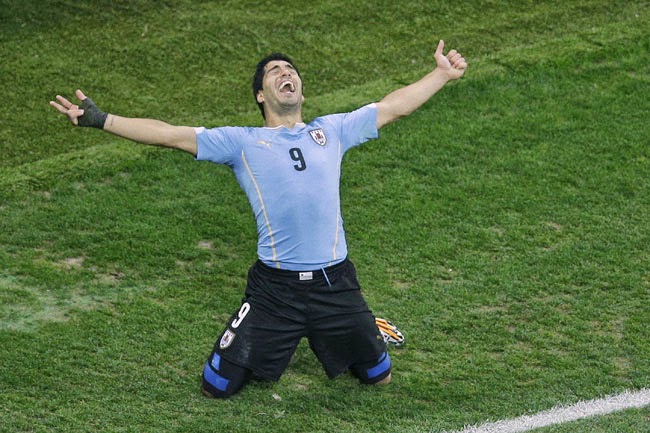 Luis Suarez scored twice to give Uruguay a 2-1 victory over England at the World Cup on Thursday, making an instant impact on his return from injury to revive his team's Group D campaign.

The Liverpool striker, who hadn't played since undergoing surgery on his left knee last month, lashed in the winner in the 85th minute, after seeing his first-half opener canceled out by Wayne Rooney.

After surprisingly losing its Group D opener to Costa Rica, Uruguay's qualifying chances have now been given a major lift, while England's hopes of advancing to the round of 16 are in real jeopardy after its worst World Cup start in more than half a century.

Suarez seemed to revel in inflicting England's second successive loss in Brazil, having been punished twice by the country's Football Association for misdemeanors, serving bans for racism and biting in the Premier League.

Of Uruguay's six efforts on target, five were from Suarez - including the two that beat goalkeeper Joe Hart as England's slack defending was exploited.

"I dreamt this," Suarez said at the Itaquerao Stadium in Sao Paulo. "I'm enjoying this moment, because of all I suffered, the criticism I received. So, there you go."

By taking his World Cup tally to five goals, Suarez ensured that Rooney's first-ever goal in 10 matches on football's biggest stage was in vain at his third tournament.

Rooney tapped the ball home from close range in the 75th minute after connecting with Glen Johnson's pass. Having also lost against Italy, England now faces the prospect of not advancing from the group stage for the first time since 1958.

"We are a team that is making progress but results decide everything and both results have been negative," coach Roy Hodgson said.

Group D leader Italy and Costa Rica, who both have three points, meet for their second group game on Friday. Uruguay now has three points, while England is on zero points after consecutive defeats following its losing start to Italy.

It is in the England where Suarez has stepped up a level and powered in the goals that saw him voted the Premier League's best player last season. And despite lacking sharpness at times, he still managed to recapture the scoring form that helped Liverpool finish second last season with 31 goals.

Suarez was in the thick of the action in the opening minutes against an edgy England side. Goalkeeper Joe Hart's first save came after Suarez's cross-shot was deflected off the head of Gary Cahill.

"Quite frankly, for long periods of the game we kept him very quiet," Hodgson said. "We are normally used to seeing him much more active in and around our penalty area than we saw him today."

When Suarez did break forward, though, he was a real menace.

Suarez's first goal came in the 39th when Diego Godin picked up possession on the halfway line and sprayed it to Edinson Cavani on the left. Suarez easily evaded Phil Jagielka to head over Hart, seizing on defensive lapses just as Mario Balotelli did in Italy's win.

Although after several chances, Rooney ended his World Cup hoodoo it was rendered meaningless by Suarez's devastating final touch.

Suarez's Liverpool teammate, England captain Steven Gerrard, tried to clear a long punt by Uruguay goalkeeper Fernando Muslera, and the ball glanced off the head of midfielder and back toward his own goal. Suarez ran onto it and beat Hart with a right-footed shot from about nine yards.

"If this was a movie, people probably couldn't have wished for a better result, at least in Uruguay," Uruguay coach Oscar Tabarez said.