Neymar feels Brazil's win over Cameroon was their best performance

Brasilia, Jun 24 : Two-goal Neymar hailed Brazil’s 4-1 victory over Cameroon as the hosts’ “best performance yet” after a man-of-the-match display that fired his team into the World Cup last 16. ”The most important thing was the team and I think this was our best performance,” said the 22-year-old after receiving his award at the National Stadium in Brasilia yesterday. ”Not because of the number of goals we scored but because of how we played, pressing our opponents in the way we wanted to. Congratulations to everyone. 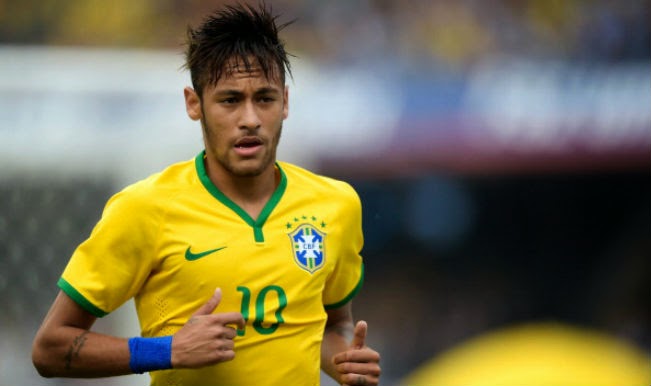 “We are on the right track and are growing all the time as we get closer to making our dream come true.” Brazil’s win saw them finish top of Group A on goal difference from Mexico and took them through to a last-16 tie against Chile on Saturday in Belo Horizonte. ”I think it will be a very difficult match. Everyone who is watching the World Cup knows that there are no weak teams in the competition,” said

Neymar, who has now scored four goals in his first three World Cup matches, equalling a feat achieved by his great predecessor Pele. ”Everybody is at the same level. Football is becoming harder and harder so we will be up against very strong opposition.” Neymar also praised his fellow forward Fred and claimed that the striker’s new moustache helped him get among the goals for the first time in this World Cup. ”I told him that he needed to have a moustache to score goals and when he got the goal I reminded him of that,” said Neymar.

Fred came in for constant criticism for his performances in Brazil’s opening 3-1 win against Croatia and in the 0-0 draw with Mexico last week, but he produced a much-improved all-round display against Cameroon, including netting his side’s third goal on the day. The 30-year-old forward declared: “I had been suffering after these two games in which I had not scored and the criticism that I had received. ”I must thank the rest of the team for having faith in me, for acknowledging my importance and quality. Now I am even happier because of the way the team played and the spirit that we regained.

“This evolution must continue because we are heading into the knockout phase where we cannot afford to make any mistakes. I hope I don’t stop scoring goals now.” As for the moustache, the Fluminense striker said: “It is only coming off if my team-mates shave it off.”