Wimbledon 2014: A look at the Big Four’s chances at All-England Club 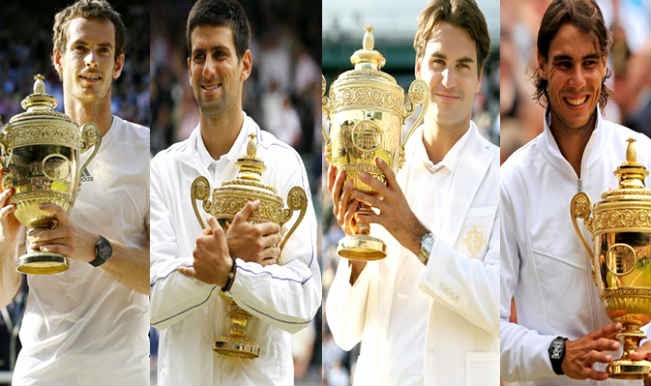 One of the major highlights of the Open Era has been the coming up of Big Four in the men’s singles– Roger Federer, Rafael Nadal, Novak Djokovic and Andy Murray. The most celebrated fours have dominated tournaments and ranking. Coming into the Wimbledon Championships, these four have won 35 titles out 37 grand slams among them since 2005. We take a look at the draw of the Big chances to lift the Wimbledon trophy:

The Swiss Ace in his quest to win the eighth Wimbledon trophy is back at All-England Club. Fourth seeded Roger Federer who last won the trophy in 2012, feels confident about his chances at the third grand slam of the year. He is coming off a great win at the Halle Open as a part warm up tournament before Wimbledon. Federer opens against Italy’s Paolo Lorenzi and is likely to meet former grand slam winner Leyton Hewitt in the fourth round.

A great record made after winning ninth Roland Garros title but Nadal followed it with the worst possible start to his grass court tournament, losing in the opening round at Halle. Second seeded Rafael Nadal has some serious threats in his draw with the likes of Lukas Rosol, Ivo karlovic and Gael Monflis in the opening stages of the tournament.

After the disappointing loss at the hands of Rafael Nadal in the final of French Open, Djokovic will look to rebound in Wimbledon. Top seeded Novak who has been winner in 2011 needs to thwart off the major obstacles in his draw like Jo-Wilfred Tsonga, Ernests Gulbis and Tomas Berdych. Djokovic will have to tackle the niggling wrist issues and tough opponents on the way for his second title.

Thanks to the unique seeding system of Wimbledon, defending champion Andy Murray is lucky not to have any encounters with the other members of Big Four before semi-finals. Third seed Murray who ended the drought for country’s grand slam title hope last year will have to come up with yet another inspiring performance this time around. Partnering Amelie Maursemo as female coach for the first time, Murray has already brought revolution in the sporting world.

Apart from the big four, the other names that could well emerge as the potential winner are the likes of Grigor Dimitrov, Stanislas Wawrinka and Kei Nishikori.
Posted by Ankita Kapoor at Monday, June 23, 2014