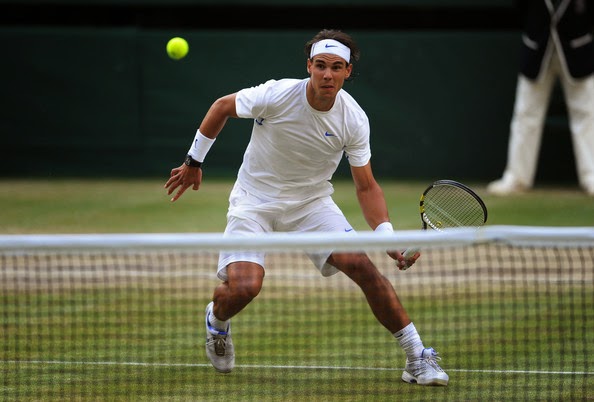 The Wimbledon men’s singles draw is out. Click on each quarter of the draw to scan the full 128-player field.
*
If there’s a single theme which looms over the 2014 Wimbledon men’s tournament, it is that the first week can no longer be seen as an easy, breezy prelude to the second week. This statement flies in the face of the tournament’s history, but new winds are blowing at this point in the sport’s existence. In order to understand how different this year’s Wimbledon could become, you must first take a brief history lesson on the tournament in the Open Era:

Wimbledon is a place where the greatest tennis players do indeed prevail. The last truly surprising Wimbledon champion was Roger Federer — yes, the Swiss did rate as a somewhat unexpected champion once upon a time — in 2003. Yet, it goes without saying that Federer subsequently backed up that 2003 championship with six more Wimbledon crowns. Over the past 40 years at the All-England Club, you’ll find only a few unexpected champions, and even then, you’ll be able to identify players who possessed considerable quality:

Arthur Ashe, a genuinely distinguished player, took home the 1975 trophy with an upset of Jimmy Connors.
Boris Becker came from nowhere to win in 1985. As was the case with Federer in 2003, an unlikely champion proved how good he really was in subsequent years.
Pat Cash — who stands alongside Richard Krajicek as the weakest of any Wimbledon men’s champion over the past 40 years — won his only major title in 1987.

Michael Stich, a much more accomplished player than Cash, won his only major at Wimbledon as well in 1991. Unlike Cash, Stich managed to find a way to still be a factor after his Wimbledon win. No, he didn’t exactly enhance his credentials the way Wimbledon’s greatest champions managed to do, but he was at least good enough to produce one high-level major tournament every one and a half years or so.
Andre Agassi won Wimbledon in 1992, to the astonishment of everyone, including himself. Yet, several additional trips to the Wimbledon semifinals and a career Grand Slam marked him as a genuinely great performer regardless of surface or surroundings.

Krajicek’s 1996 title was every bit the surprise Agassi’s 1992 championship turned out to be. Krajicek made the Wimbledon semifinals in 1998 and lost to Goran Ivanisevic in a marathon fifth set, but he really didn’t sustain a high level of performance at the All-England Club.
Speaking of Ivanisevic, his 2001 title came out of the blue because the Croatian sensation was a wild card at that particular tournament. However, Ivanisevic produced a better career than either Krajicek or Cash, as much as that might surprise some tennis fans. Ivanisevic was a legitimately strong grass-court player, much more than Cash or Krajicek — at least in terms of results. “Emergency Goran” and his many moods reached a number of Roland Garros quarterfinals as well. He wasn’t quite a Johnny-one-note player away from Wimbledon.

Lleyton Hewitt’s 2002 championship was not expected, even though the Australian was one of the best players in the pre-Federer period. He made good (though not great) use of a small stretch of time in which Pete Sampras was too old, Andre Agassi was getting old, and Federer was still learning how to play the sport.

All in all, that’s eight surprise champions over 40 years. Three of them — Ashe, Agassi and Becker — won at least three of the four major tennis tournaments. Two others — Ivanisevic and Hewitt — were formidable contenders or floaters for roughly a decade on the ATP Tour. Only three of Wimbledon’s surprising champions over the past 40 years — Cash, Krajicek, and Stich to a slightly lesser degree — produced careers that were either ordinary or brief outside of their victories at SW19.
This really is a place where the best of the best hold the trophy on Centre Court after a full fortnight’s work.
History, therefore, says that the legends win here. Moreover, in 2014, it’s quite likely that another legend of the game will prevail. Yet, it’s anything but certain that more than two of them will get out of the first week. That’s what’s new at the All-England Club.
*
When his prime period ended, Roger Federer lost in Wimbledon quarterfinals — to Tomas Berdych in 2010 and Jo-Wilfried Tsonga in 2011. Last year, though, Federer — albeit while playing a perfectly solid match — lost in the first week of a major for the first time in NINE YEARS.
That’s right — Federer’s second-round loss to an out-of-his-mind Sergiy Stakhovsky (the Ukrainian played that well in what was a high-level match) broke a streak of 36 consecutive major-tournament quarterfinal appearances for the Swiss. 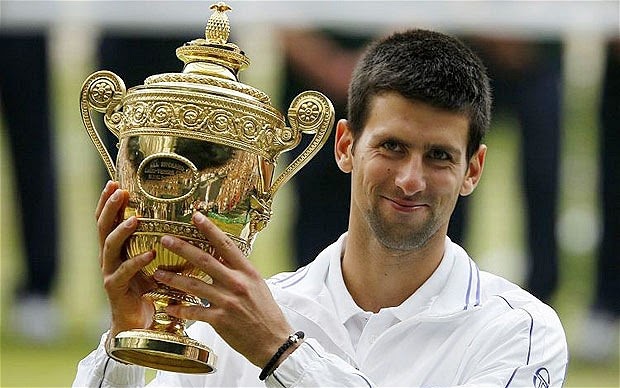