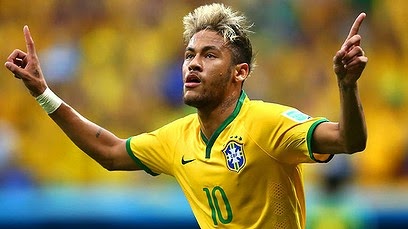 Two goals by the wonderfully gifted Neymar helped steer Brazil into the last 16 of the World Cup tonight.

The Brazilian superstar took centre stage with two excellent finishes to give the hosts a 2-1 lead at the break.

Brazil are still some way short from being a great side but with Neymar in his current form they are clearly going to be there or thereabouts at the business end of the tournament.

Neymar has now scored four goals in three games and most of the good things that Brazil produced involved the Barcelona whizzkid before he was substituted in the 70th minute.

Elsewhere there were a few moments of uncertainty for the hosts particularly after Joel Matip equalised midway though the first half.

They were exposed defensively on occasions and further forward doubts still persist over Paulinho, Fred and Hulk.

Fred at least got off the mark when he scored Brazil's third from close range early in the second half and Brazil made the game absolutely safe when impressive substitute Fernandinho slotted home six minutes from time to set up a last 16 clash with Chile.

In the other Group A game, Mexico beat Croatia 3-1 to book a second-round tie against Holland.