LONDON, July 3, 2014: Eugenie Bouchard became the first Canadian to reach a Grand Slam singles final on Thursday when she defeated Romania’s Simona Halep in the Wimbledonsemi-finals. The 20-year-old world number 13 beat the third seed and French Open runner-up 7-6 (7/5), 6-2 and will take on Czech sixth seed Petra Kvitova, the 2011 champion, in Saturday’s final.

Tall, blonde Bouchard, a marketing dream for the women’s game with her photogenic looks, athleticism and confident, positive demeanour, will also rise to number seven in the world rankings, the highest position ever achieved by a Canadian player.

Halep, the highest seed left in the draw after the shock defeats of Serena Williams and Li Na, suffered a nasty fall in the fifth game of the opening set when she jarred her left ankle into the bone-dry Centre Court. Play was also held up in the first set tiebreak when a fan was overcome by the 30-degree heat and had to be helped from the court.

But the distractions did not hinder Bouchard who achieved her first win over a top-five player at the sixth attempt although she needed six match points to get the job done. “It was hard at the end. It took a lot of mental strength to get through that,” said Bouchard.

“It’s my first Grand Slam final and probably my toughest match yet. I’m looking forward to the challenge. “I never say I’m surprised because I put in a lot of hard work over the years. This has been a lot of years in the making. I expect a tough challenge in the final. She will go in prepared.

“It’s going to be really cool. I’m glad I got to stay at Wimbledon for two whole weeks. I’m going to give it my best effort in the final.” In front of a crowd which included Oscar winning actors, Colin Firth and Maggie Smith, it was Halep who broke first for 2-1 before Bouchard, playing in her third Grand Slam semi-final of the year, hit back for 2-2.

Halep then needed a medical time-out after a worrying slip on the dry, grassless baseline which caused her to turn her left ankle. The Romanian held firm, fighting off a break point in the eighth game to take the first set into the tiebreaker where play was halted again with Halep 3/2 to the good when a fan collapsed on the hottest day of the year in London.

Bouchard, the junior champion in 2012, broke for a 2-1 lead in the second set courtesy of two double faults and secured a double break for 5-1. There was a moment of tension in the seventh game when Bouchard saw a match point swallowed up by an ace which stood despite her having stopped when a fan screamed out from the crowd.

A few nervy moments followed as five match points came and went but victory was secured when a tiring Halep, playing for the third time in three days, netted a service return. 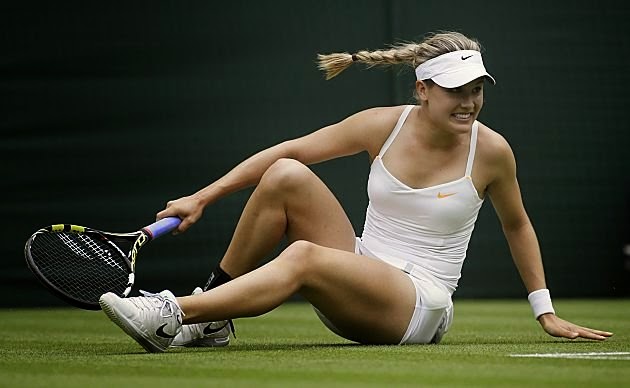