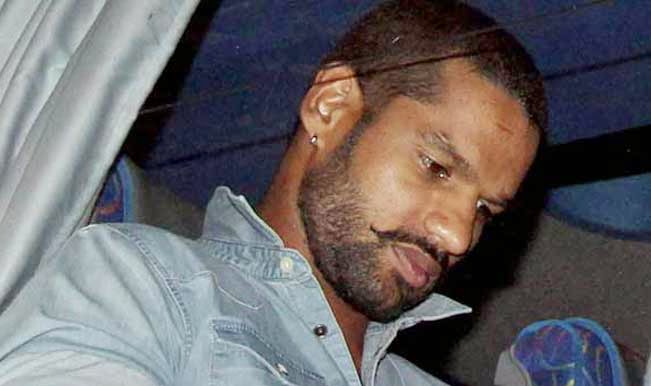 Derbyshire, Jul 3: India lost Shikhar Dhawan early in their 142-run chase on the third and final day of the second tour game after Derbyshire declared their second innings on 156 for three in a bid to bring some excitement to the three-day match, here today.

India were 50 for one at tea, requiring another 92 runs to win the match with Ajinkya Rahane (12 not out) and Murali Vijay (25 not out) coasting along.

The Indian bowlers had opted for some bowling practice after declaring their innings on the overnight score of 341 for six but Derbyshire, lying second from the bottom of the Division 2 County table, surprised the visitors after Bhuvneshwar Kumar, Mohammad Shami and Stuart Binny had picked up a wicket each.

Medium-pacer Matt Higginbottom (1-20) then justified his captain’s decision by trapping Dhawan lbw for nine in the fourth over of the innings but Rahane and Vijay have stitched together an unbeaten 37-run second-wicket partnership.

This was after Shami (1-39) had recovered from his suspected calf strain and bowled eleven overs, trapping Paul Borrington (29) LBW after lunch.

Meanwhile, Billy Goddleman went on to score his second half-century of the match, finishing unbeaten on 56 not out off 86 balls, including seven fours. Alex Hughes (36 not out) was the other unbeaten batsman when the innings came to a close.

It was heartening to see the Indian attack in better rythm as new-ball bowler Kumar scalped Ben Slater early, for nought.

Perhaps the big delight could be taken from Ishant Sharma’s spell (0-10) as he was on-the-money for the first time in the two practice games, bowling seven overs without any trouble. Interestingly, Pankaj Singh, Ishwar Pandey and Varun Aaron did not bowl in the morning session.

Binny continued his fine work-out in this game, picking the wicket of skipper Chesney Hughes (20). It goes well with his spell of 1-25 in the first innings on day one as well as his half-century yesterday. Ravindra Jadeja (0-7) and Murali Vijay (0-8) too sent down some overs of spin.

On day one, Derbyshire had won the toss and thanks to half centuries from Wes Durston (95), Ben Slater (54) and Harvey Hossein (53 not out) posted 326 for five declared.
On day two, Cheteshwar Pujara (81 retired out) and Binny (81 not out) had scored half-centuries to help India overtake the hosts’ first-innings score. Skipper Mahendra Singh Dhoni too enjoyed a decent hit in the middle, scoring 46 runs off 56 balls.
Posted by Ankita Kapoor at Friday, July 04, 2014