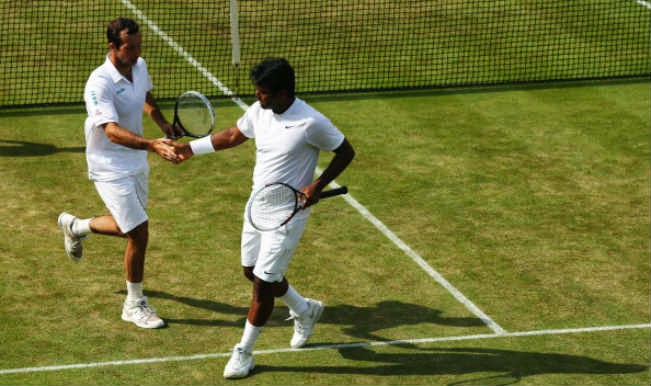 London, July 3: Leander Paes and Radek Stepanek of Czech Republic entered the semifinals in men’s doubles while another Indian Sania Mirza and her Romanian partner Horia Tecau sailed into the pre-quarterfinals of mixed doubles in the Wimbledon Championships here today.

Fifth seeded Paes and Stepanek recorded an upset win over third seeds Daniel Nestor of Canada and Nenad Zimonjic of Serbia in a quarterfinal match. The Indo-Czech pair won 3-6 7-6 6-3 6-4 in the 152-minute contest. In the semifinals, Paes and Stepanek take on the unseeded pair of Vasek Pospisil of Canada and Jack Sock of United States. Pospisil and Sock stunned the second seeded pair of Alexander Peya of Austria and Bruno Soares of Brazil 6-4 3-6 7-6 6-4 in another quarterfinal match.

Meanwhile, Sania and Horia, seeded sixth, outplayed Mate Pavic and Bojana Jovanovski 6-3 6-3 in a rain-interrupted match that lasted 58 minutes. Rain had suspended play when the Indo-Romanian pair was leading 4-3 in the opening set in its second round contest but after resumption, Sania and Horia took little time to topple their opponents last night.

It was a total domination on the part of Sania and Horia who won a total of 58 points as compared to just 35 by their rivals.
The Indo-Romanian combo will now take on the 10th seeded pair of Jamie Murray and Casey Dellacqua. It was, however, curtains for Rohan Bopanna and his Czech partner Andrea Hlavackova as they lost their second round mixed doubles match.

Bopanna’s campaign is over in Wimbledon as he had earlier lost in the men’s doubles with Pakistani partner Aisam-ul-haq Qureshi.