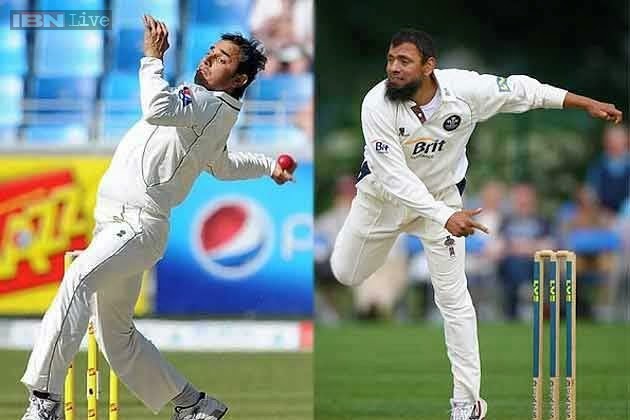 Karachi: The Pakistan Cricket Board (PCB) has sought the help of former champion spinner Saqlain Mushtaq to enable Saeed Ajmal make a return to international cricket before the World Cup.
"The PCB has contacted me to help and work with Ajmal," Saqlain confirmed on Wednesday from London.
Saqlain is regarded as Pakistan's top off-spin bowler and the pioneer of the "doosra" delivery, who ended up with 208 Test and 288 one-day wickets before a knee injury cut short his career.
Saqlain, who now runs his own spin bowling academy in the United Kingdom, was never reported in his career for his action. But his successor, Ajmal was suspended by the International Cricket Council (ICC) on Tuesday from bowling in international cricket after he failed bowling tests in Brisbane.
Ajmal was reported for his action by match officials after the first Test against Sri Lanka in Galle last month. He has also been previously reported for his action in 2009 but was cleared after ICC tests.
Saqlain said at present Saeed's elbow appeared to be going beyond the 15 degrees extension allowed by the ICC.
"Yes he seems to be having problems but he is a born fighter and I am sure he can adjust himself and his bowling to different conditions," Saqlain said. (Ajmal Says Ban Not an Issue)
"Saeed will have to review his bowling action and remodel it accordingly because of the new protocols of the ICC on bowling actions," he added.
Saqlain said that despite a busy schedule he was always ready to do his bit for Pakistan cricket and would like to work with Ajmal.
Saqlain had also applied for the spin bowling coaching position this year to the PCB but it preferred to appoint leg-spinner Mushtaq Ahmed.
Ajmal, who has been Pakistan's top bowler in the last three years has emulated Saqlain's success in many ways by taking 178 wickets in 35 Tests and 183 wickets in 111 ODIs.
A reliable source said the PCB had asked its illegal bowling action committee, which is headed by former Test spinner Iqbal Qasim, to decide the next course of action for Ajmal. The board is mulling whether Ajmal should be sent to London to work under the supervision of Saqlain or the former player be invited to Lahore.
The committee, which includes Mushtaq and the head coach of the national cricket academy Muhammad Akram, has been tasked with the job of trying to find a way to get Ajmal back into international cricket.
"The PCB has decided that it is too risky going for an appeal against the suspension as if fails Saeed will face an automatic one year suspension," one official said.
"The PCB has decided to go with the second option of trying to ensure Saeed is able to remodel his action and make a comeback before the World Cup," he added.
Meanwhile the PCB has advised Ajmal against making any statements on the issue and on Wednesday they issued a press release quoting the off-spinner as saying: "I shall wait for the outcome of deliberations and verdict of Pakistan Cricket Board's Illegal Bowling Action Committee and until that process is complete, I shall not be making any further comments on the subject."
Posted by Ankita Kapoor at Wednesday, September 10, 2014