Both India and West Indies aim to take lead at Dharamshala 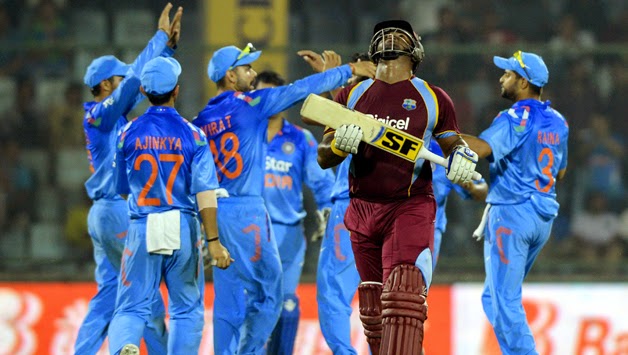 India took West Indies by storm in the second One-Day International (ODI) at Delhi to level series 1-1 and then it was cyclone Hudhud which played spoilsport as third ODI at Vishakhapatnam had to be cancelled. It now effectively becomes a 4-match series and both teams will be looking for a victory at Dharamshala which hosts the fourth ODI to stay in contention for series win.
India after being outplayed by West Indies in the 1st ODI bounced back at Feroz Shah Kotla to set up a 48-run win, mainly due to stunning effort by bowlers. Mohammad Shami was star for India as he scalped four wickets and looks to be a better choice to be bowling towards the end, an area where Indian bowlers most struggle. The pacer was well accompanied by spinning duo of Amit Mishra and Ravindra Jadeja. With wicket at Dharamshala expected to be fast and bouncy India will stick to three pace bowlers. Left-arm spinner Akshar Patel who was drafted in side for last two ODIs may not find place in the playing XI.
In batting department openers have failed to provide a solid start with Ajinkya Rahane being dismissed cheaply in both the ODIs. Virat Kohli’s form has been the talk of the season for all the bad reasons, but his 62 at number four in second ODI would have relaxed Indian camp and looks like he will continue to bat at his new position. Ambati Rayudu or even Suresh Raina could be positioned at number three in the batting order.
For West Indies it was a disappointing night at Delhi as batsmen failed to capitalise after being provided a solid platform. Middle order seems to be worrying factor for visitors, but opener Dwayne Smith is utilising his Indian Premier League (IPL) experience productively. All-rounders Dwayne Bravo, Andre Russell and Darren Sammy need to contribute with bat if West Indies are to take lead.
Conditions at Dharamshala will help Windies pacers who have been bowling well in the preceding matches and could well put Indian batting under test early on in the innings. Spinner Suleiman Benn has been doing a fair job in absence of Sunil Narine and no major change is expected to their playing XI.
With series levelled 1-1 and both teams possess good chance of overcoming each other the match promises to be a riveting and balanced contest at the picturesque Dharamshala.
Squads:
India: Shikhar Dhawan, Ajinkya Rahane, Virat Kohli, Suresh Raina, Ambati Rayudu, Ravindra Jadeja, Amit Mishra, Bhuvneshwar Kumar, Mohammed Shami, Ishant Sharma, Umesh Yadav, Murali Vijay, Kuldeep Yadav, Akshar Patel
West Indies: Dwayne Bravo (c), Darren Bravo, Jason Holder, Leon Johnson, Kieron Pollard, Denesh Ramdin (wk), Ravi Rampaul, Kemar Roach, Andre Russell, Darren Sammy, Marlon Samuels, Dwayne Smith, Jerome Taylor, Suleiman Benn.
Posted by Ankita Kapoor at Thursday, October 16, 2014