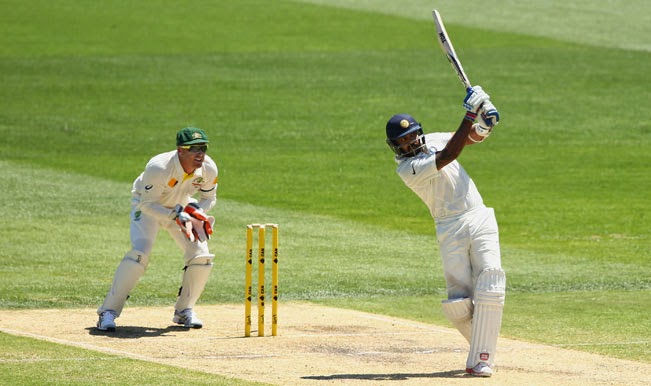 Adelaide, Dec 11  Opener Murali Vijay struck his seventh Test fifty as India began their reply to Australia’s mammoth first innings total of 517 by reaching a steady 119/2 at lunch on the third day of the first cricket Test here today. At the Adelaide Oval, Vijay (53 runs, 88 balls, 3 fours, 2 sixes) put on 81 runs for the second wicket with Cheteshwar Pujara who was batting on 34 not out (77 balls, 4 fours). This was after Australia had declared at their overnight score of 517/7.
The day’s play began half an hour early to make up for the lost time yesterday due to rain. There was not even a speck of cloud on the blue sky as the sun came out bright and shining and 32 overs were bowled in the first session. There was a strong wind blowing across the ground and with Ryan Harris (1-20) and Mitchell Johnson (1-38) made use of it with the new ball.
The two bowlers were on the money from the word go and Johnson would have been successful instantly, but keeper Brad Haddin let go off a tough chance off Shikhar Dhawan in the second over. The left-handed opener though was in an attacking mood, and while Vijay took his time to settle down he sped away, smacking three boundaries in the third over.
He used the little width that was offered to him and raced to 25 runs off just 23 balls (5 fours), before playing a loose drive against Harris to be bowled with an inside edge deflecting back to his stumps. It brought Pujara out to the crease, the batsman looking to make amends for scoring only one fifty in his last 15 Test innings.
In between, Michael Clarke had thrown the ball to off-spinner Nathan Lyon (0-34) as early as the seventh over, but did not persist with him at that instant as Vijay looked to attack him. When he was reintroduced into the attack a little while later, the Tamil Nadu batsman was still looking to hit him out of the attack. Vijay hit Lyon for a six and a four off successive balls in the 20th over, adding another big hit in the bowler’s next over.
Vijay was making use of the life given to him by Mitchell Marsh (0-5) at third slip off Johnson in the 14th over earlier, as the all-rounder dived to his left and only got a hand to the driven ball. The Indian’s 50-run mark also came up in that over.  Afterwards, Vijay and Pujara settled down to grind out the bowling in this morning session and brought up their 50-run partnership in the 20th over when the former went on an attacking spree against Lyon.
The opener had taken 46 balls to score his first boundary but hit three fours and two sixes in the 19 balls after that. Things were looking smooth for India at this juncture with the 100-run mark coming up in the 24th over. Four overs later, Vijay brought up his half-century off 78 balls. But with the first session’s play extended, Johnson and Harris were brought back for one more spell before the lunch break.
The left-arm fast bowler looked particularly threatening as he began a short-ball attacking barrage against Vijay, pushing him on the back-foot. It worked as he slipped in a length ball afterwards, and the batsman was caught behind feeling for it. Indian skipper Virat Kohli then walked in and, off the first ball he faced, got hit on the head by a bouncer from Johnson.
There was no staring or words exchanged in light of the Phillip Hughes’ death. Instead, all the Australian players as well as the umpires rushed in to check on the batsman who was okay. He resumed guard and finished unbeaten on 3 going into the break.
On day one, David Warner had scored a rousing 10th Test hundred, helping Australia to 354/6 at stumps after winning the toss and electing to bat first on a placid track. On day two, intermittent rain washed away nearly four hours of play, and in the two hours allowed, Clarke scored his 28th Test hundred while Steve Smith scored his fifth Test century to help Australia to a 500-plus total.
Posted by Ankita Kapoor at Wednesday, December 10, 2014